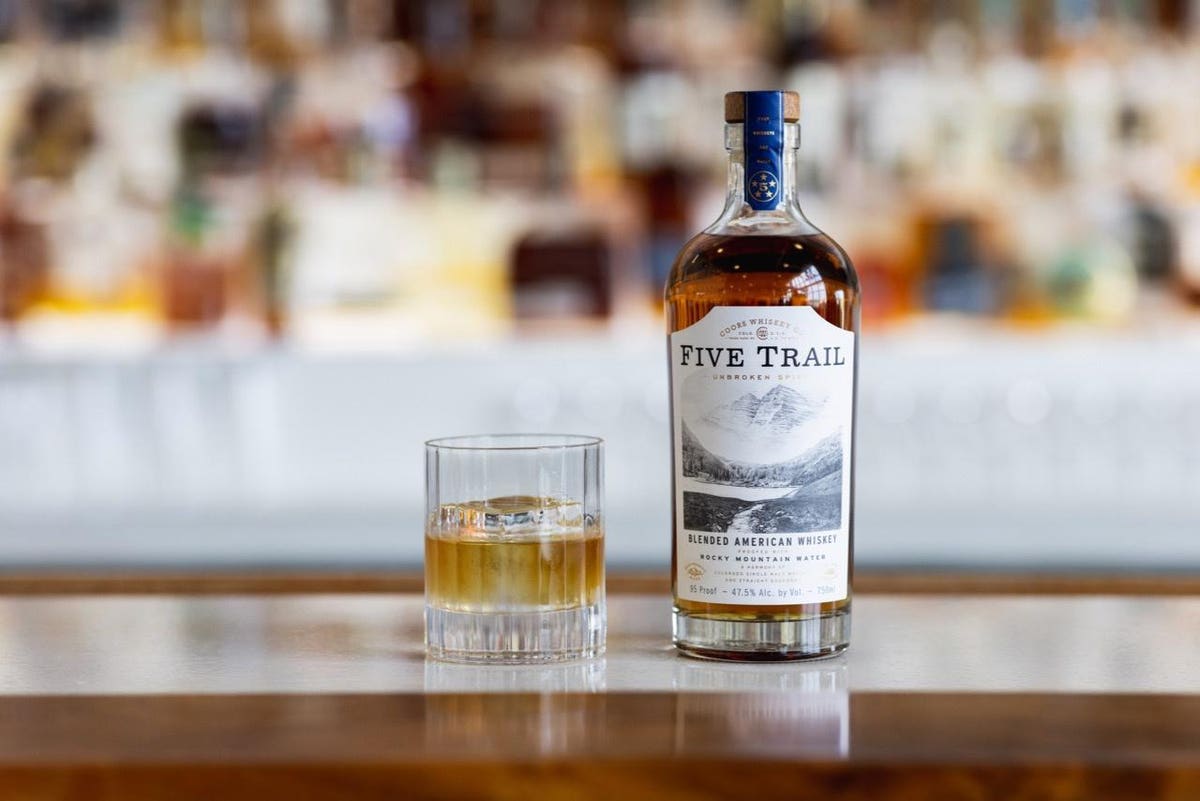 The ever-competitive alcoholic beverage space in America just got a little more crowded and complicated with the recent release of Five Trail Blended American Whiskey from the newly founded Coors Whiskey Co. As the first full-strength spirit released by Molson Coors Beverage Company (MCBC), it helps to blur further the once-solid lines that used to delineate the American alcohol landscape. Ones that kept the three major products (beer, wine, and spirits) in their own space and discouraged any cross production.

The product is part of MCBC’s reorganization that began in 2020 with an announced intention of expanding the brewing giant’s footprint into areas outside the beer industry it helps lead. Coming from their Next Generation Beverages division, the whiskey is the first of many more planned launches as the MCBC learns more about the spirit space and gauges consumers’ interest in their product. This follows the company’s distribution rollouts of Superbird, a tequila-based RTD, and La Colombe Coffee Drinks, alongside their CBD-infused drink Verywell, part of a joint venture between Molson and Canadian cannabis company Hexo Corp.

The last few years have seen several acquisitions and new product launches as companies look to new areas to help drive growth and dollars. ABInBev just rolled out Nütrl, a premium vodka seltzer, that they are hoping carves out a space for them in the quickly expanding ready-to-drink category. That is on top of two other products under their umbrella-Cutwater another RTD, and Babe Wine, a canned wine.

In the last few years, the exponential growth of hard seltzers has transformed the beer industry as large and small brewers have rolled out a continual lineup of new products to capture consumers’ attention and dollars. Topo Chico, a product owned by Coca-Cola
, partnered with MCBC to release a hard seltzer version. Sierra Nevada Brewing just debuted a Hard Kombucha and Seltzer product, and Boston Beer’s Truly Hard Seltzer has brought numerous line extensions to market. That’s on top of the myriad of products that craft brewers have introduced to their regional and national markets.

The initial release of Five Trail will only be into four states: Colorado, Georgia, Nevada, and New York, ones that Molson Coors has a strong distributor partner to pair the rollout with for a smooth launch. The project is being helmed by David Coors, a fifth-generation member of the iconic family and the son of Pete Coors, the recently retired CEO of the company. He first proposed making a whiskey to his father two decades ago when he was in college. “When I first brought this up, he shot me down and told me that ‘we’re good at making one thing and that’s beer,’ and that was the end of the conversation, but times change,” he says. “When Gavin said that we needed to innovate and introduce new products, I brought my idea back to the table, and it was approved.”

To create the whiskey, MCBC partnered with Bardstown Bourbon Company, an award-winning distiller in Kentucky. The product is a blend of a thirteen-year Kentucky bourbon and three four-year whiskeys-a four grain from Kentucky, a wheated from Indiana, and a single malt from Colorado (made with Coors malt). The finished product is then cut to 95 proof with Rocky Mountain water. For the first batch 10,000, six pack cases of 750ml bottles were produced. Its suggested retail price of $59.99 puts it solidly in the middle ground of the whiskey market.

While several mid-sized craft brewers have their own spirit brands in the market, the arrival of a company the size of MCBC could signal another shift in the ever-evolving alcohol market. Where it leads is not known, but if the last few years have shown anything, it’s that the American public’s taste for new and exciting products has not slowed. The Coors Whiskey Co might be poised to exploit that.